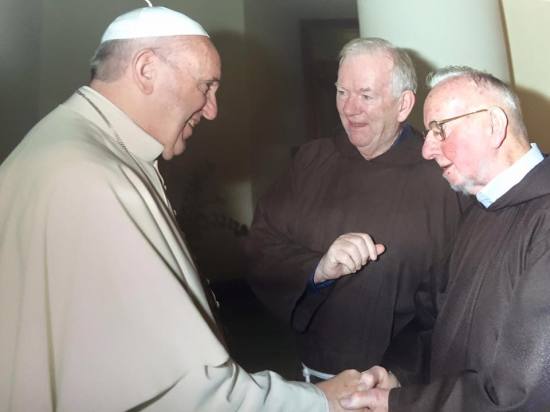 We are delighted to report that while on pilgrimage to Rome for the Year of Mercy our Brother Kevin had the immense privilege of meeting Pope Francis this morning after Mass in the guesthouse of Santa Marta.

Brother Kevin was presented to His Holiness by Brother Peter who has accompanied him on his pilgrimage to Rome to venerate the Relics of our saintly brothers Padre Pio and Leopold Mandic who have been brought to Rome for the Jubilee.

As Pope Francis has been recalling all of us as Church to the renewed practice of the Spiritual and Corporal works of Mercy we in the Irish Capuchin Province are delighted that Brother Kevin who, through his work with the Capuchin Daycentre in Dublin is renowned as an apostle of mercy to the homeless and poor here in Ireland, has met with Pope Francis during this Jubilee Year of Mercy!

Who knows, perhaps in time Pope Francs might even decide to visit the Daycentre to see for himself the incredible work done there by Brother Kevin and his team.