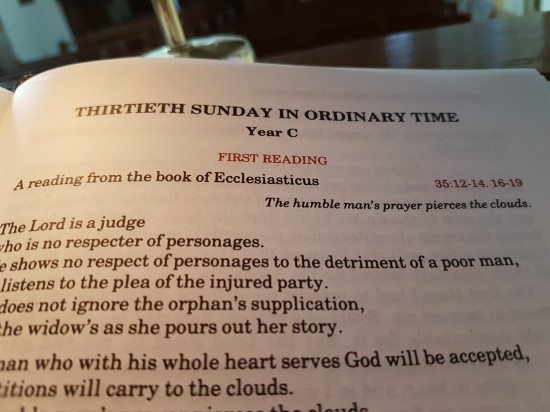 Prayer that pierces the Clouds
Today’s parable highlights the contrast between the self-righteous religious man, a Pharisee, and the humble tax-collector, regarded as a sinner.
Pride is first in the list of the seven deadly roots of sin. In the story of Adam and Eve the original temptation was “You will be like gods, knowing good and evil” (Gen 3:5). Their temptation was to be their own gods. Before their disobedience they knew only what is good. By seeking to usurp God’s authority they came to know evil also. Pride does not walk humbly with God but marches to a different drum … in disobedience, intellectual rebellion, disregard of the commandments, self-deification and pomposity.
Religious self-righteousness is the most despicable form of pride. There is a legitimate pride which recognises one’s talents and value. But the Pharisee’s pride, judging others and despising them, is contrary to God’s compassion. Note that the Pharisee said his prayer to himself, not to God. Whereas the prayer of the humble person pierces the clouds, going directly to God.
The humble prayer of the tax-collector came straight from his heart. It is simple and uncomplicated. “God, be merciful to me, a sinner.” The name of God needs no other title or adornment, such is his direct contact with God. This sort of simple, direct prayer is a response to glimpses we get of God’s relationship with us. It may lead us to adoration or praise, to thanksgiving or petition … in this instance, to profound repentance.
“God, be merciful to me, a sinner.”
St. Francis prayed, “Who art thou, my Lord, and what am I.”
And St. Augustine: “O Lord Jesus, let me know myself, let me know you, and desire nothing but only you