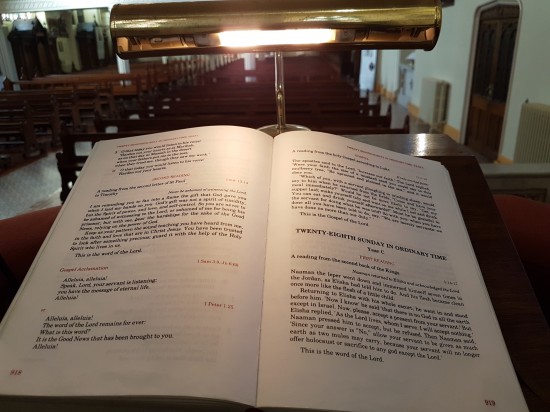 Matthew will provide the Sunday gospel readings this year.  There were three stages in the development of each gospel. The foundation was laid in the life and teaching of Jesus.  Then the memory of Jesus was passed on by the developing Christian communities through stories of miracles, in moral teaching and by liturgical celebration.  At the third stage, each of the four evangelists wrote the story in the light of the pastoral situation of his time.

Matthew, a Christian Jew, wrote in the mid-80s, more than 50 years after Jesus.  Tension between the traditional Jews and the Christian community had reached the stage when there was now a clear split between them.  A Council of Jews had officially banned “the followers of the Nazarene” from all Jewish assemblies.

Matthew’s writing reaches out to his fellow Jews to see how Jesus actually fulfilled Old Testament texts and figures.  Matthew shows how Jesus was very respectful to Jewish law, but he was very critical of how the Scribes and Pharisees interpreted the Law.

Matthew also directed his writing towards Christians.   His gospel is a handbook of Christian instruction. There is more moral teaching in this gospel that in the others.  The gospel message develops in 5 major sermons, most notably in the Sermon on the Mount. We see how the disciples gradually formed into structured communities.  Matthew is the only evangelist to identify these communities as the church.

The opening words that each evangelist quotes from Jesus reveal the focus of the writer.  Matthew gives us one short sentence. Jesus announced, “Repent, for the kingdom of heaven is at hand.”  To repent means to think again, to make a break from the dark ways of the past.  Jesus offers us an alternative to the ways of injustice, violence, greed, selfishness, hatred, etc.  This could be a beautiful world for all. Believe in the Good News of Jesus about the kingdom of God on earth.

The kingdom of God is the ideal.  Every ideal requires a taskforce and this begins with the call of the first four disciples.  This little group expanded and was given the name, Church. Matthew’s focus is on the kingdom of God’s reign in thought and action.  The role of the Church is to serve the kingdom.

May the light of Matthew’s Gospel each week help us to grow as servants of God’s kingdom on earth.