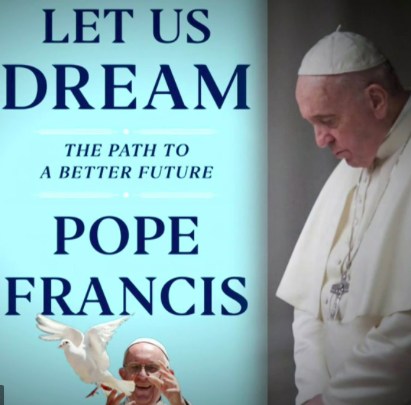 Pope Francis, with the assistance of Austen Ivereigh, recently published a book entitled “Let us Dream.”  In describing his ideals for the world, he was not the first dreamer.  He is following his Master.  Jesus began his public mission by proclaiming his dream: he called it the Kingdom of God (Mark 1:15-20).  He dreamt of life on earth being a mirror of heaven.  It’s not a million miles away, he said, as this Kingdom is very close … if only we would repent, that is, change our way of thinking and living so as to commit ourselves to his Good News.

There is another way of living.  Instead of the nightmare of war, he spoke of brothers and sisters in the one family of God.  Instead of bitterness and retaliation, he spoke of a love that refuses to be embittered and inspires one to pray for the oppressor.  In place of the spectre of famine which will always haunt a greedy, grasping world, he spoke of serving God through feeding the hungry, clothing the naked, and sheltering the homeless.

In place of the murky deeds of darkness he wants all of life to be a reflection of the light of heaven.  He prayed that the will of the Father be done on earth as it is in heaven.  Wherever God’s will holds sway, there God is king.  And that is the Kingdom of God on earth, the dream of Jesus.

Every dream needs a taskforce for tis implementation.  The Church is the taskforce of the Kingdom.  Immediately after proclaiming the closeness of God’s Kingdom, Jesus called his first followers.  The brothers, Peter and Andrew, fishermen, were casting their nets.  “Follow me,” he said, “and I will make you catchers of people.”  Another pair of brothers, James and John, were in their boat mending their nets.  “Follow me and I will make you menders of people.”  Casting nets means mission while mending nets means maintenance.

These fishermen were ordinary folk called to an extraordinary task: the first hint of the community of followers, later known as the Church, the taskforce of the kingdom.

All this happened at Capernaum.  Visiting the Holy Land, I was surprised at how small the town had been. Archaeologists tell us that it was once a busy, bustling place.  But it was small by our standards.  I should have known better, for has it not always been God’s way to choose the weak to confront the strong, and simple, ordinary folk to confront the worldly wise?

Isn’t it a pity when the Church tends to forget its humble origins.  When it becomes triumphal and bossy.  When it rewards itself by aping the conceits of worldly power in wealthy establishments and the titles and trappings of self-importance.  When it promotes careers to the detriment of humble service as the taskforce of the dream of Jesus, a Kingdom of truth and life, of holiness and grace, of justice, love and peace.   The Church is to be the taskforce of the Kingdom but it is important to remember the words of Saint Augustine that there are many in the Church who do not belong to the Kingdom while there are many in the Kingdom who are not in the Church.

The Church I Love

While we are shocked when scandals from the past are uncovered, we must remember that there are far more flowers than weeds in the garden of the Church.  The Church that I love produces really holy, prayerful people, deeply in love with God.  And it has always been the mother of the greatest workers for the Kingdom, implementing the dream of Jesus:  caring and educating, peace-making and developing, nursing and protecting, beautifying and protecting, striving for justice and challenging tyranny.  One survey estimates that 80% of charitable organizations were founded by practising Catholics.  Think of Vincent be Paul, Simon Community, Threshold, Mary’s Meals, Trocaire, Concern, food centres etc.  This is the Church of ordinary people humbly serving the God’s dream of love for the world.

If you have a book token since Christmas, get your hands on Pope Francis’ book, Let us Dream.   Dreamers see a new way of living, a way of making this world a better place for everybody.

We pray that the Church will always be faithful to its mission of serving the Kingdom of God.

May the teaching of Christ inspire all people to turn away from injustice and violence so that all people can live in peace, according to God’s plan.

We pray for people whose lives are in danger because of their religious beliefs.  May their persecution cease.

We pray to the compassionate, healing Lord for protection from the Covid virus and for the speedy return to normal life.

God our Father, graciously hear the prayers which we offer in the name of Jesus Christ, your Son, Our Lord.  Amen.