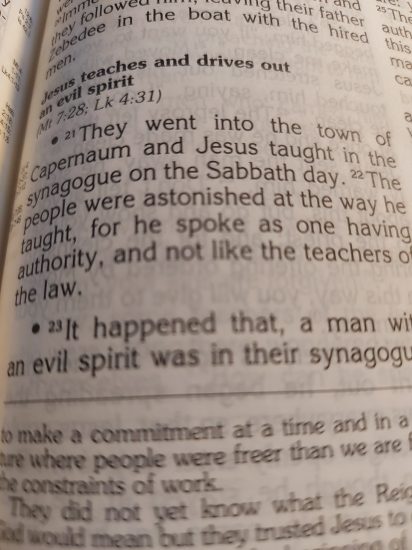 Last Sunday we had the dream of Jesus as he launched his mission to establish the kingdom or reign of God on earth.  “The time has come and the kingdom of God is close at hand.  Repent and believe the Good News.”   This meant repossessing the world from the ways by which Satan had misled people through lies and false promises.

Many scholars say that Mark wrote his Gospel for the Christian community in Rome when Nero began the persecution of Christians there.  The most popular form of writing at that time was drama.  The public reading of this Gospel, either by one voice or several, has opened up the dramatic power of Mark’s writing in a way that previous scholars did not suspect.  It’s a drama of struggles, non-recognition of who Jesus is, and half-seeing, as when a blind man being healed described people like trees walking about.  In this drama the life of Jesus seems to end in total failure when he dies with the dreadful cry, “My God, my God why have you forsaken me?” End of story?   There is moment of dramatic silence.  Then the Roman Centurion, seeing how Jesus died, proclaims, “In truth this man was Son of God.”   Finally, the divinity of Jesus is recognised.   All is changed.  Through the medium of drama, Mark wrote a theology of suffering, revealing the presence of God in the midst of suffering and persecution.

The Reign of God

We continue today with Mark’s Gospel, 1:21-28.  Jesus began his mission by proclaiming that the reign of God would replace the reign of Satan.  In the early chapters of Mark there are several exorcism stories which dramatically describe the victorious march of Jesus, like an army in battle, driving out the evil, occupying forces.  In this warfare Jesus has two weapons, the light of his word and the divine power manifested in his deeds of healing.  The people are impressed.  “Here is a teaching that is new, and with authority behind it: he gives orders even to unclean spirits and they obey him.”   The teaching of Jesus is new.  He rejects the old ways of injustice, greed, violence, war, disrespect and so on.  The old ways will be replaced with a religion of non-violence, mercy, compassion, truth and gentleness.  Pope Francis called the mission of Jesus “a revolution of tenderness”.  The new way of Jesus is motivated by Christ-like love.

Notice how the evil spirit threw the demented man into bodily convulsions and loud cries.   By contrast, Jesus said sharply, “Be quiet.”   Great healing and inner peace come to people who give time in prayer to developing a personal relationship with God.   It is through prayer that our inner demons are driven out.  God’s power is gentle.  True wisdom needs no loud shouting.

Technology has invaded the quiet areas of the mind through the mechanical amplification of noise.  Many psychiatrists and neurosurgeons are very concerned about constant use of smartphones seriously damaging our attentiveness to other people.  Marriage counsellors recognise that it is often a factor in the break-up of a relationship. The ability to hold concentration is also suffering.  Twenty years ago, the attention span of people was 20 seconds.  Five years ago, it was reduced to 8 seconds.  It is probably less now.   Twitter, Facebook and slogans have replaced rational debate.  Whatever is not liked is called fake news.  It has become the age of post-truth.  In the denial of truth, lies take over, the louder the more effective.  But as Jesus said, it is the devil who is the father if lies.  Faced with the loud cries and convulsions of the demented man, Jesus called for quietness.  Attention to God is another name for prayer.

Those who saw how he cured the demented man were astonished.  Astonishment expands into wonder:  and wonder opens the mind to thoughts of God.  Science bred the expectation that everything can be measured, taken apart and controlled.  But there is a shift in scientific thought in the growing awareness that everything in this world is related to everything else.  Instead of divide and conquer, people are realising that it is better to unite and conquer. More and more people are taking courses in muscular relaxation. breathing exercises and techniques of mental awareness, often called mindfulness.  By these means they are recovering inner peace and the sense of wonder which opens up the beauty of God’s creation.   Beauty is a wonderful nurse to the demented mind.

“Be still and know that I am God.”  God’s power is strong but gentle.  True wisdom avoids shouting.  Be still, my soul, and rest in the Lord.   His gentle power whispers to me.  He offers a quiet strength which is greater than the outer frenzies and inner fretting which often possess us.  May God open my eyes and ears to all that is beautiful in this world.  Open my imagination to grow in wonder.