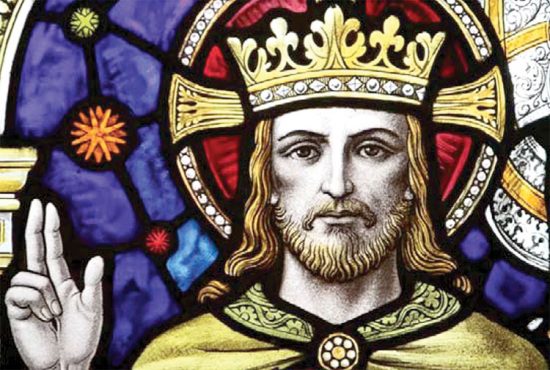 Today, the last Sunday of the liturgical year, is when we celebrate Jesus Christ, the Universal King.  The end of the liturgical year anticipates the end of time when “the Kingdom of God will come in all its fulness.  Then the just will reign with Jesus Christ for ever, glorified in body and soul, and the material universe itself will be transformed.  God will be ‘all in all’ in eternal life” (Catechism 1060).

This Sunday’s reading from Luke (23:35-43) takes us to the foot of the cross on Calvary.  At the end of Jesus’ journey, over his head, his crime was posted, “Jesus Christ, King of the Jews.”    How many took the charge seriously?  Did anybody of sane sense really think that he was a threat to Caesar or to public order?  The irony of that day was that he was a king, though not in a way that the worldly mind could understand.

A king different to earthly royalty

Jesus as king was the reversal of the ways usually followed by the royalty of this world.  He did not sit on an elevated throne to symbolize his power, but he hung from a cross, too weak to save himself from death.  He did not wear a bejewelled crown but he was capped with a crown of sharp thorns, an appalling sight, without beauty, without majesty, a thing despised and rejected by people.  He had no armies at his command nor servants in attendance: instead, he came to serve and to offer his life as a ransom for many.  Earthly kings are usually removed from commoners who must keep their eyes downcast and may not speak until they are first spoken to.   Jesus came to his own and sought the lowliest of them.  Now he was dying between two condemned criminals.  One of them joined with those who were mocking and taunting, but the other spoke up and rebuked his companion.  “Have you no fear of God at all?  We got the same sentence as he did, we deserved it.  But this man has done nothing wrong.”  Then he turned to Jesus and uttered one of the most wonderful prayers of all time.  “Jesus, remember me when you come into your kingdom”.  It is interesting that this is the only occasion in Luke’s Gospel that Jesus is addressed simply by name with no title attached.  In the brotherhood of suffering there are no distinctions of privilege or class.  Yet they are not equal because this brother in suffering will be revealed on the third day as the divine brother who has conquered death and will welcome his companion on Calvary into paradise.

The Kingdom of God is at hand

Jesus announced at the beginning of his public ministry that his mission would be to establish the kingdom of God in the world.  “The time has come, and the kingdom of God is close at hand.  Repent, and believe in the gospel” (Mark 1:14).    His preaching and way of life set out the ideals of what the world would be like if we all lived up to his plan.

We have been given the king but the kingdom is still not fully grown.  In sporting terms, we have the best management in the business, but the league is still in progress and we have won nothing yet.  That is why Jesus compared the kingdom to seeds falling on different kinds of soil, plants battling with weeds, a hidden treasure etc.  The ultimate triumph of the reign of God is still in the future.  The task of the Church is to be at the service of the kingdom.  But, as Saint Augustine remarked, there are many in the Church who are not in the kingdom while there are many in the kingdom who are not in the Church.  The qualities of the reign of God are listed in the Preface of today’s Mass … a kingdom of truth and life, of holiness and grace, of justice, love and peace.

A Kingdom of truth and life

In the Gospel, Satan is identified as the father of lies and a murderer from the beginning.  In other words, anti-truth and anti-life, the exact opposites of the reign of God.  The first victim of any war is truth.  Propaganda becomes a most powerful weapon. Many people today are like Pontius Pilate who disdainfully asked Jesus, “What is truth?”  Truth has become what suits me, regardless of the facts.  Facts have been replaced by slogans.  Slogans win elections more than reasoned debate.

Do we have a world where truth is respected?  Is there truth in business dealings, tax returns, court testimony, tribunals, media reporting, daily conversation?  We have fake news, conspiracy theories, misleading propaganda and imbalanced panels discussing serious issues of morality.  The famous psychoanalyst Carl Jung said that the world is so rich with delusions that truth is priceless.

The second ideal is life. Jesus came that we might have life and have it to the full.

How do we respect life if we vote for abortion, condone war and capital punishment, close our hearts to famine, homelessness and poverty?

A Kingdom of holiness and grace

The kingdom of Jesus will be recognised in the evidence of holiness and grace.  Is the name of Jesus a holy name any longer?  Is Sunday the Lord’s Day, a holy day?  Has the shopping arcade become the new Sunday temple?  Kingdom people are prayerful and reverential.  They cooperate with the graces of the Holy Spirit.

A Kingdom of justice, love and peace

Saint Paul said that the kingdom of God is not about material things but about justice, peace and joy in the Holy Spirit (Rom 14:17).

Are we concerned about social justice for the underprivileged?  Does our society manifest the love and peace of God?

Justice is an essential foundation for peace.  When peace flourishes, faces will be bright with joy.  And joy is a sure anticipation of heaven.  “This day you will be with me in paradise.”

Today’s celebration of Jesus Christ as King is not a matter of flag waving or public parade.  We express our belief in the ultimate triumph of the reign of God and renew our commitment to do our part in living up to the ideals of Jesus Christ.

Our Father, who art in heaven.  Hallowed be thy name.  Thy kingdom come. Thy will be done on earth as it is in heaven.