Gospel Reflection – 17 Sunday, Year B – The Loaves and Fishes 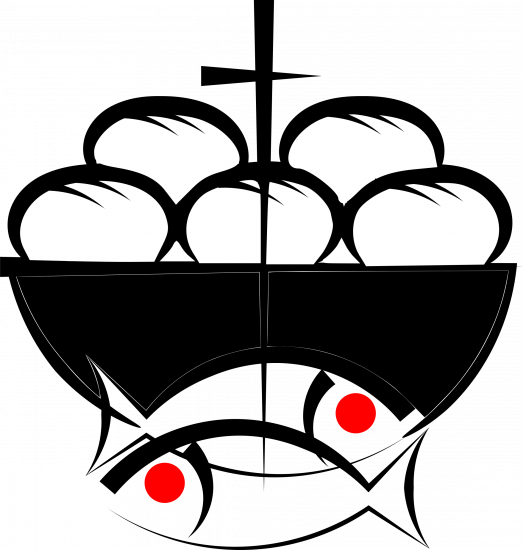 Today we commence five Sundays when our Gospel is taken from Chapter 6 of John which is all about the bread of life.  The symbol of John in art is an eagle which sores high.   John begins a chapter with something on ground level such as water in a well, bread or blindness.  Like the soaring eagle he develops the idea to soaring heights.   Today’s gospel begins with the miracle of loaves and fishes to feed the physical hunger of people.  Next week we will see this miracle as a sign to move on to the bread of faith which satisfies the hunger of the mind and the thirst of the soul.   Then we soar to the third level to what Jesus calls, “the bread that I shall give.”   This is identified as the bread of the Eucharist.   Our reflections over the five weeks will be timely because of the current debate about refusing the Eucharist to certain people.   The underlying question asks what is meant by the Real Presence.

Today we reflect on the multiplication of the loaves and fishes, using our imaginations to dip into the memory of somebody who might have been there that day.

My name is Ben Sheba.   My name may mean nothing to you but you have probably heard about me.   You see, I was the small boy who gave the five barley loaves and the two fish which Jesus used to feed hundreds, even thousands of people.

Let me fill you in on my memory of that day.   ‘Twas April, just before the Passover when we would  give thanks to God for the first grain harvest.   Barley was the first grain of the season.   Barley made a poor quality bread but at least it was fresh.   My mother made a big batch of bread and gave me five loaves to bring to my granny’s house.

The two fish?   One of the lads I used to play with on the seashore … his dad was a fisherman.   He kindly gave me two fish to bring home to my mother.

We knew all these fishermen well.   They were our neighbours.   Everybody knew that a man from Nazareth called Jesus was being called a very holy man.   Some of our neighbours, Andrew and his brother, as well as Zebedee’s sons, had left their boats and had followed that holy man.

They had come back by boat from the other side of the lake.  Andrew recognised me and he jokingly asked me what I had in my bag.   “Five loaves for granny and two fish for mammy.”

Crowds gathered.   I had never seen such crowds.   Caught up in the excitement, I forgot all about going to granny’s house.   I fell in with some of my friends.   Like young boys anywhere we made our way to the front of the crowd gathering on the hillside to hear the holy man, Jesus.

To be honest with you, I had no idea what he was talking about but he looked like a very nice man.   There was something about him that I couldn’t take my eyes off him.

Jesus finished talking.   Nobody made any effort to move away.   Jesus and the men around him were having some conversation when I saw Andrew pointing towards me and he said something to Jesus.   Then he came to me and asked me would I give my five loaves and two fish to the nice man.

What would I say to my mother?   What about granny?   Yet I couldn’t say no to that man with the nice face.

Anyway, you all know what happened.   He blessed the bread and the fish and these multiplied and they fed thousands.   Nobody there could ever forget it.   And there were lashings left over.   Andrew gave me back far more than five loaves and two fish.

Jesus moved on.   Daily routine resumed.   Years rolled by and I grew to manhood.

I never saw Jesus again.   Andrew and Simon, now called Peter, became fulltime preachers.   They sometimes came back to our village.   They told us that Jesus was the Messiah.   Those of us who saw the miracle of the loaves and fishes had no problem in believing.

They also told us that Jesus had been crucified like a criminal but had risen from the dead.   But before he died, he told his followers that he would continue to remain with them in consecrated bread.   Again, I had no problem in believing for I had seen what he could do with bread … my bread, mammy’s bread, granny’s bread.

As I recalled this happening over the years, there is one lesson I try to practise.

If Jesus asks you for something, make no excuses but give it to him.

Don’t say … “look I am only a small boy … I want this bread for my granny … what will mammy say.”   No excuses, just give to Jesus.

The bread was of poor quality … barley bread … don’t say “Sure what would God want from my poor life … I have no talent worth talking about.”

Just give what you have and let God do the multiplying.

Give your time to somebody … a listening ear … a generous contribution to a worthy collection.   Give what you have and let God do the multiplying.   And in the scraps left over you will find that you receive more than you ever gave.

Lord Jesus Christ, you said of yourself, “I am the bread of life.”   You provided bread for people when you multiplied the loaves and fishes.  You moved on to describe yourself as the spiritual bread to satisfy the hungers of the heart and mind.  And then you promised to give the bread which would be your flesh offered up on the cross for the life of the world.  This is your presence in the Blessed Eucharist. Strengthen our faith.   Call back those who have strayed away.   Help them to realize what they have been missing.