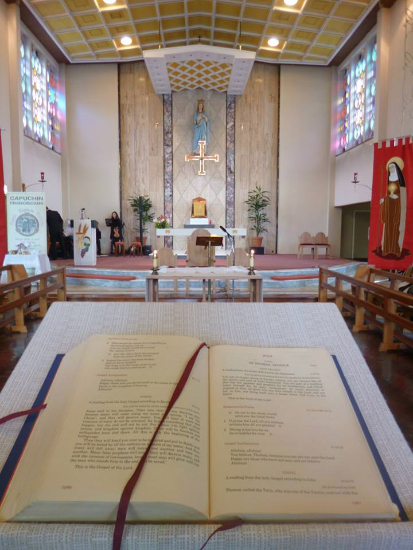 The meeting of Zacchaeus and Jesus is a story of up and down.  Zacchaeus was a small man but he had climbed up a sycamore tree.  He had also climbed up to top of the financial ladder.  He was a senior tax collector and a wealthy man.  But it is one of the great disappointments of life  to have climbed to the top of the ladder only to find it was up the wrong wall.  He was financially rich but he was spiritually poor.  Money had not brought him inner contentment.   So, he was anxious to see what kind of man Jesus was.

If Zacchaeus was the man who climbed up, Jesus was the one who came down.  He came down from heaven to stand with us on the ground-level of life.  From ground-level he looked up at Zacchaeus and invited him to come down.  He did not say to Zacchaeus, “Come up to my superior position.”  No, he said, “Come down to my level.”   This is the level of the Beatitudes.  Blessed are the poor, blessed are the gentle, those who work for justice, those who are pure in heart. As Saint Paul put it:  “Although he was rich, he became poor for your sake, so that you should become rich through his poverty.”   Pope Francis calls the Beatitudes the identity card of a Christian.  “In the Beatitudes, we find a portrait of the Master, which we are called to reflect in our daily lives.”

Zacchaeus did come down.  He came down from his false superiority to the ideals of Jesus.  He there and then resolved to give half his wealth to the poor and to make fourfold restitution to the people he had cheated.  He might not have much money left, but he would have the happiness and contentment that money could not buy.   The Son of Man came down to seek and save those who were lost.