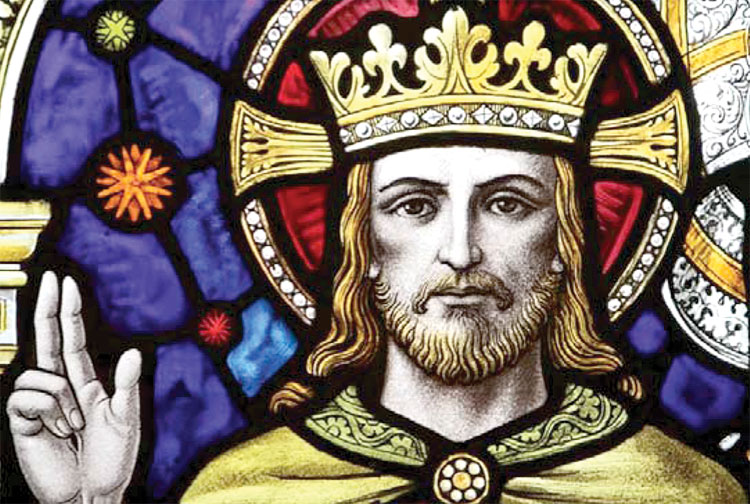 This is the last Sunday of the liturgical year when we celebrate Jesus Christ, the Universal King.  The end of the year anticipates the end of time when “the Kingdom of God will come in all its fullness.  Then the just will reign with Jesus Christ for ever, glorified in body and soul, and the material universe itself will be transformed.  God will be ‘all in all’ in eternal life” (Catechism 1060).

The Kingdom is close at hand

At the beginning of his public life, Jesus announced that his mission would be the establishment of the kingdom or reign of God on earth.  But it would not be accomplished instantly.  People would have to repent and believe.  To repent means to think again and to change our ways if necessary.  To believe means to commit our lives to the ideals of Jesus.  He told many parables about what the kingdom would be like.  It would come as seeds sown in different types of soil, resulting in different levels of growth.  Its growth would be impaired by a choking weed sown by the great enemy.  Yet the smallest of seeds would have the potential to grow and spread.  It would be like a small portion of yeast which would raise up stodgy dough to become beautiful bread.  The king has come but the kingdom is still growing.

The Church is the taskforce of the Kingdom

Immediately after announcing his mission of the kingdom, Jesus began to call the apostles.  The taskforce of the kingdom would be the community of disciples, later known as the Church.  The word ecclesia literally means the people who are called out.

Jesus was well aware that any mention of being a king or the promised messiah would be the torch to ignite a political fire, so he urged people not to use these titles.  But the secrecy could not go on for ever and eventually he was arrested by the authorities.

On trial before Pilate

Today’s Gospel (John 18:33-37) is about the trial of Jesus before Pilate, the Roman Governor.  Picture the contrast between the two.  Governor Pilate has all the trappings of power, richly dressed, with soldiers armed to the hilt to guard him, a powerful army waiting on his orders.  The soldier he had always been respected the power of violence.  The politician he was trying to be, aspired awkwardly to the art of compromise and to the subtleties of wheeling and dealing.   Now picture the itinerant preacher from Galilee, simply clad, drawn and haggard after a sleepless night in a cold cellar, hands cuffed by ropes.  But which of them was free?

Pilate homed in straight to the question that concerned him.

“Are you the king of the Jews?”

Jesus needed to know where the question came from.  “Is this your own question, Pilate …”, in other words a political question about sedition … “or is this a Jewish question about a messianic king?”

“Am I a Jew?”  Pilate clearly had no interest in the Jewish question.  “The chief priests have handed you over to me”.  But he still required reassurance on the political threat.

Jesus set him at ease on the matter.  “My kingdom is not of this world.  You have nothing to fear.  I have no armies training in the hills.”

“So you are a king then,” Pilate picked him up, although the anxiety had gone from his voice.  Whatever Jesus was, he was no threat to his governance.

“Yes, I am a king.  I was born for this.  I came into the world for this: to bear witness to the truth; and all who are on the side of truth listen to my voice.”

“Truth” said Pilate, “what is that?”   Truth was something of no interest to Pilate.   From Roman Governor to colonial master, to communist dictator, the empires of this world were established by the unjust use of power, exploitation and corruption.  But the true followers of Jesus listen to his voice and are on the side of truth.

Signs of the Kingdom

The marks of God’s kingdom are identified today’s Preface.

“A kingdom of truth and life,

a kingdom of holiness and grace,

a kingdom of justice, love and peace.”

Truth and life are the first marks of God’s reign whereas confusion of truth and anti-life programmes are marks of the devil who was identified by Jesus as the father of lies and a murderer from the beginning.  The first victim of any war is truth.  The famous psychoanalyst Carl Jung said that our world is so rich with delusions that a truth is priceless.  The economy of consumerism is built on delusions of happiness.  Expensive tribunals seek to uncover the truth but rarely succeed.  Addiction to internet enslaves people to conspiracy theories and fake news.  Jesus said, “If you make my word your home you will indeed be my disciples, you will learn the truth and the truth will make you free” (John 8:32).

The second marks of the kingdom are holiness and grace.  These are seen in people who believe in God and show reverence for God’s name and God’s day every week.  They are prayerful.  They cooperate with the graces of the Holy Spirit.

The fruits of the Holy Spirit are manifested in people who are committed to justice, love and peace.   Truth is the backbone of the kingdom of God.  It is the only foundation for justice and peace.

“What is truth?” asked Pilate, distainfully.

Jesus is the way, the truth and the life.  Our calling as his followers is to work for the kingdom he established.

A Prayer for the coming of God’s Kingdom

Our Father, who art in heaven, hallowed be thy name.  Thy kingdom come.  Thy will be done on earth as it is in heaven.  Give us this day our daily bread.  And forgive us our trespasses as we forgive those who trespass against us.  And lead us not into temptation, but deliver us from the Evil One.