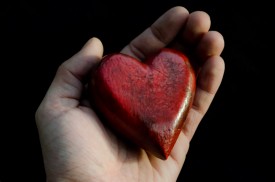 On Passion Sunday each year we have what people refer to as the long gospel, properly called The Passion of Our Lord Jesus Christ.  This year we have Saint Luke’s version.  The four evangelists basically write about the same event but each one has his own particular interests as well as his immediate readership in view.   There are far more references to prayer in Luke’s writing than in any of the others.  We can see this prayerfulness in his account of the Passion.

Beginning with Jesus in the garden of Gethsemane, Luke understands the agony as a testing on the deepest level of Jesus’ total union with the Father’s will.  He pictures Jesus kneeling, a strong posture, not prostrate in fear and sadness.  “Father, if you will, take this cup away from me yet not my will, but thine be done.”  In prayer he handed everything over to the Father’s will.  An angel from heaven appeared and gave him strength, testifying that the Father has accepted his prayer.  In his anguish he prayed even more earnestly, and his sweat fell to the ground like great drops of blood.

At the beginning and end of the agony, Jesus told the three apostles who were with him, “Pray, not to be put to the test.”  This is the last petition in the Our Father.  But in contrast to the strength of Jesus in prayer, they were weak and fell asleep for sheer grief.

Luke is the only evangelist who mentions three prayers uttered on Calvary.  In the first prayer Jesus asks for the forgiveness of his persecutors.  “Father, forgive them for they do not know what they are doing.”  The love of Jesus is not contaminated by the injustices, mockery and violent actions to which he is subjected.  In the Acts of the Apostles, Luke writes that the first Christian martyr, Stephen, also prayed for his persecutors.  Down through the centuries many heroic martyrs did not allow the wrongdoing of others lessen the Christian love in their hearts.

The second prayer on Calvary is that of the repentant thief.  He admits his own guilt while recognizing the innocence of Jesus.  Then he utters one of the most famous of prayers, “Jesus, remember me when you come into your kingdom”.  This is the first time in the Gospel that we hear Jesus addressed by name alone, without any accompanying title such as Master or Lord.  In the brotherhood of suffering all are equal and titles of superiority count for nothing.  To this repentant sinner Jesus promises a share in the fruits of the day’s events.  “Indeed, I promise you, today you will be with me in paradise.”

The third prayer is the dying cry of Jesus, “Father, into your hands I commend my spirit.”

In the versions of Matthew and Mark, Jesus, in a final muscular spasm, cries out the opening words of a psalm, “My God, my God, why have you forsaken me.”  The complete psalm is actually one of trust in God.

By accepting suffering Jesus is in solidarity with us

The Letter to the Hebrews, written at a time of persecution and suffering, calls Jesus a compassionate high priest.  “For the sufferings he himself passed through, while being put to the test, enables him to help others when they are being put to the test” (Heb 2:18).  For the past two years, due to the Covid epidemic, we have been through very testing times.  As I write, the Ukranian people are victims of an evil, brutal war.   It is a time to remember that Jesus is not just a Saviour from a remote past, but he has entered into solidarity with all people suffering in any way.  The wounds of suffering humanity are a continuation of the incarnation when the Word became flesh and subject to suffering.

Think of the many ways that Jesus suffered.  People who have suffered an injustice might remember that Jesus too was a victim of false charges and unjust trial.  He was mocked and spat upon.  People who were betrayed in marriage will relate to the cold kiss of Judas on the cheek of Jesus.  When we feel let down by friends, remember that Jesus was deserted by many of his close friends when he most needed support.  He experienced family pain as he looked at his mother standing at the foot of the cross.  As Simeon had predicted, the sword of sorrow pierced her heart.  Think of the physical suffering … crowned with thorns, lacerted with whips, falling under the cross, nailed through hands and feet.  As his dry throat grew swollen, his breathing became difficult.  Every movement of his body stabbed a new pain.  In any time of suffering remember that Jesus is the Saviour who is with us.  You are not alone.

The Stations of the Cross remind us of people who accompanied Jesus.  Simon of Cyrene shared the weight of the cross.  Veronica wiped his face clean of blood, sweat and spittle.  A group of sympathetic women supported him.  The apostle John and some women supported Mary at the foot of the cross.  During the worst of the Covid pandemic, people were heroic in medical service, care of vulnerable neighbours and observance of restrictions.  The generous response of people to the needs of the Ukranian victims is another manifestation of a Christ-like solidarity with those who suffer.

On this Passion Sunday, think of the humble donkey carrying Jesus into Jerusalem.  You may not have much to offer, but the little sacrifice you make for the wellbeing of others makes you a carrier:  not a carrier of virus or of evil war, but a carrier of Jesus, the wounded healer.

“Let us keep our eyes fixed on Jesus, who leads us in our faith and brings it to perfection:  for the sake of the joy which lay ahead of him, he endured the cross, disregarding the shame of it, and has taken his seat at the right hand of God’s throne” (Heb 12:2).

Lord Jesus Christ, compassionate Saviour, by humbly accepting the sufferings of your Passion, you have lovingly entered into solidarity with all who are suffering in any way.  As we look up at your cross may we recognise that you have not deserted us but you are with us in any dark valley.  As your painful death was the prelude to your resurrection, may we go forward to Easter full of hope.