One is important to God – A Sunday Gospel Reflection 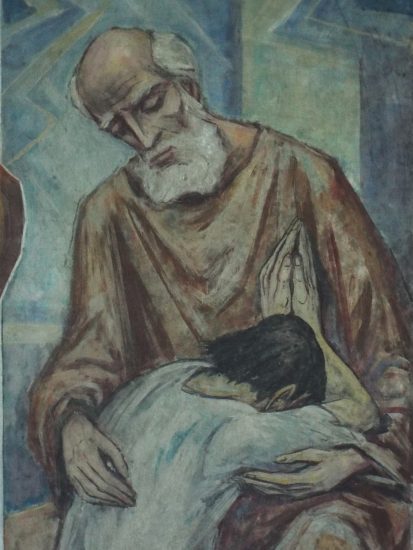 One is important to God

While the First Reading and Responsorial Psalm are chosen to connect with the Gospel of the Day, it occasionally happens that the Second Reading touches on the same theme.  The mercy of God to sinners features in each text this Sunday.

In the First Reading (Exodus 32:7-11.13-14), when the Israelites worshipped a calf of molten metal, Moses pleaded with God not to blaze in anger against them, and God in mercy relented.

In the Second Reading (1Tim 1:12-17), Paul recalls his own conversion from being a persecutor of Christians: “Mercy was shown me … and the grace of Our Lord filled me with faith and with the love that is in Christ.  Here is a saying that you can rely on and nobody should doubt: that Christ Jesus came into the world to save sinners.”  Seven years ago, Pope Francis introduced the Jubilee of Mercy: “Jesus Christ is the face of God’s mercy.  These words might well sum up the mystery of Christian faith.  Mercy has become living and visible in Jesus of Nazareth, reaching its culmination in him.”

The Gospel today (Luke: 15:1-32) sets before our eyes this living face of mercy.  “The tax collectors and the sinners were all seeking the company of Jesus to hear what he had to say, and the Pharisees and scribes complained. ‘This man welcomes sinners and eats with them’.”  The name, Pharisee, meant the Separated One.  They stayed apart from sinners, proclaiming condemnation rather than offering mercy and hope.

In response, Luke gathered together three parables about the celebration when something that had been lost is found.   A caring shepherd finds a straying sheep so he calls his friends to celebrate.  Luke, the evangelist most sensitive to the role of women, follows with the story of the woman who finds a lost silver coin.  She too calls for a celebration.  Then we get the most famous of the Lord’s parables, the joy of the father hugging back his lost son is contrasted with the negativity of the elder son who refused to share in the party and coldly referred to his brother as “this son of yours”.

One is important to God

On the Fourth Sunday of Lent, we already reflected on the Prodigal Son.  Today we focus on the importance of one in each of the three parables, one sheep, one coin, one lost son.

One is important to God.  The love of God is intensely personal and individual.  A man with a hundred sheep is concerned when one has strayed away.  A woman with ten silver coins searches diligently when one is lost.  There is more rejoicing in heaven over one repentant sinner than over ninety-nine virtuous people who have no need of repentance.  A man with two sons loses the younger one to his youthful wildness.  Daily he shields his ageing eyes which scan the horizon for that one face.  Many travellers pass that way and they exchange pleasantries.  But there is one for whom his heart is waiting.

As Isaiah wrote, “I have carved you on the palm of my hand”.  One name is precious to God: “I have called you by your name, you are mine.”

So different is the law of the jungle built into society today.  It’s weakest to the wall and survival of the strongest.   Multinational corporations manipulate thousands of employees and will change location with little sympathy for the individual.  In the cruel world of competition, compassion is regarded as a weakness: its only function is to cover up a mistake.

In contrast to the law of the jungle, the law of Jesus draws attention to the one, to the littlest one.  “In so far as you did this to one of the least brothers of mine, you did it to me.”  Judgement itself is based on our attitude to the one, the least one.  The kingdom won by Jesus on Calvary is promised that very day to one … and he, a condemned criminal.   In the one-to-one dialogue which took place there, the repentant thief did not address Jesus with any title such as Lord, but called him by his name as all are equal in the poverty of suffering and death.

I have called you by your name, you are mine

The first lesson to draw is that I am important in God’s eyes.  Jesus is concerned about one sinner: so much so that the return of one is an occasion for rejoicing in heaven!  If I were the only sinner in the world, Jesus would have done all he did for my sake alone.  I am that important to God.  Many people fight shy of intimacy with God … keep him at a respectful distance!  No – he loves me – he wants to hear the sound of my prayer, the beat of my heart.  Imagine, God wanting me!  There are billions of people alive today and God knows each one of us by name.

The second lesson follows naturally.  What I receive from God I should pass on to others.  Charity begins with the people you meet every day.  It can be safe and undemanding when one talks compassionately about the plight of people thousands of miles away.  But what of the one to whom I owe an apology … the one about whom my talk is always critical … or the one I have frozen out of my affections?   That one person is precious in God’s eyes.  If I claim to be serious about God, then I must strive to partake in God’s special love for each individual.

Brother, Sister, one is important to God: every single one.

The Lord is kind and full of compassion, slow to anger and rich with mercy.

Open up my heart to enjoy your love for me.

And may your grace enable me to pass on your love to everyone I meet.