Opening the Door to Christ – St Conrad of Parzham

Today (21 April 2021) we mark the feast of one of our Capuchin brothers, St Conrad of Parzham. St Conrad is probably not so well know in Ireland however his life and ministry is truly inspirational. He spent over 40 years opening the door to those who called to the Friary. Below is more detail on Conrad and his simple yet powerful life. 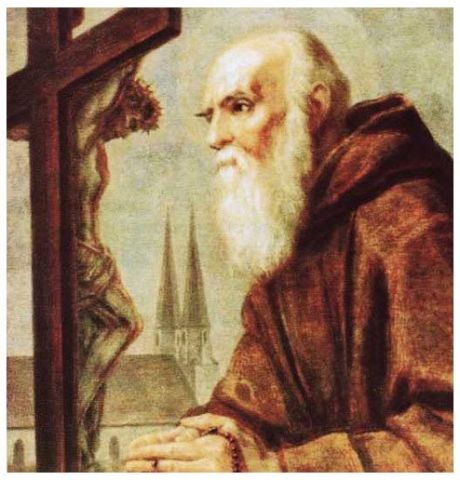 Born 22 December 1818, he was baptized with the name of John, the son of Bartholomäus Birndorfer and Gertrude Niedermayer, and was born on the family farm in Parzham, now a part of the town of Bad Griesbach, then in the Kingdom of Bavaria, now part of Germany.[1] Baptized Johann Evangelist, he was the second youngest of 12 children, five of whom died in infancy.[2]

At the age of six, he started elementary school in nearby Weng. Young John’s devotion was noticeable especially when he prayed in church, the distant location of which was no hindrance to his visiting it frequently even in inclement weather. He had a great devotion to the Blessed Virgin, and each day fervently recited the rosary. On feast days he frequently made a journey to some remote shrine of the Blessed Mother. During such pilgrimages, always made on foot, he was engaged in prayer, and when he returned in the evening, he was usually still fasting.[2]

John spent his early years on the family farm. His mother died when he was 14; his father two years later. After attending a parish mission in 1838, he decided to enter the religious life. The following year, at the age of 31, and after distributing his inheritance, he was admitted as a lay brother among the Capuchin Franciscan friars. [1]

Immediately after his profession he was sent to the Friary of St. Ann, in the city of Altötting.[3] The friary served the Shrine of Our Lady of Altötting, the national shrine of Bavaria to the Blessed Mother. Conrad was given the task of assisting the porter at this shrine. In March 1851, he had to leave Altötting to go to Burghausen to care for a dying priest. The following September, he entered the novitiate at Laufen, where he was given the name Conrad in honor of Conrad of Piacenza. He then returned to Altötting as porter.[2]

Because it was a large and busy city, the duty of the friary porter was a very difficult one. Conrad was known to be diligent at his work, sparing in words, bountiful to the poor, eager and ready to receive and help strangers. Brother Conrad fulfilled the task of porter for more than 40 years, assisting the inhabitants of the town in their needs of body and soul.[1] Conrad loved silence in a special way. His spare moments during the day were spent in a nook near the door where it was possible for him to see and adore the Blessed Sacrament. During the night he would deprive himself of several hours of sleep to devote the time to prayer either in the oratory of the friars or in the church. It was generally believed that he never took any rest, but continually occupied himself in work and exercises of devotion.

During his lifetime, Conrad was reputed to have been able to read the hearts of those he met, and he was attributed with the gift of prophecy.[4] His heroic virtues and the miracles he performed won for him the distinction to be ranked among the Blessed by Pope Pius XI in 1930. Four years later, the same pope, approving additional miracles which had been performed, solemnly inscribed his name in the list of saints.

(Above detail thanks to St. Conrad of Parzham – Saints & Angels – Catholic Online)