THE AWARD OF THE YEAR

During its diamond jubilee celebrations (1958-2018) in Lusaka, the Zambia Association of Sisterhoods (ZAS) awarded Br Killian Flynn OFM Cap for his outstanding contributions to its formation. The celebrations were held at Roma Parish on 17th November 2018. Br Augustine Mwape OFM Cap (custos) received the said award on behalf of the Capuchins. 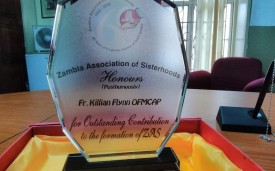 The Zambia Association of Sisterhoods(ZAS) was founded in 1958. At that time the aim was to attain a deeper understanding of the problems of African girls and women, and to share views, hopes, plans and expertise for the betterment of Sisters’ apostolates.

In 1935 Br Killian had been appointed Regular Superior of the missions. He was only 30 years of age at the time of his appointment. A year later, on 28 July, he was appointed Prefect Apostolic, with the title of Monsignor, of the newly erected Prefecture of Victoria Falls.

(Thanks to the Zambian Capuchin Facebook Page for the report)