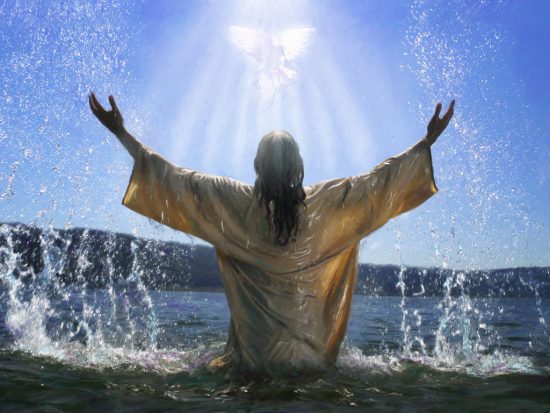 This Sunday’s Gospel (John 1:29-34) begins with John the Baptist pointing towards Jesus and saying, “Look, there is the lamb of God that takes away the sin of the world.”  His words are repeated at Mass in order to alert us to the awesome privilege of welcoming the Lord in the Blessed Eucharist.  “Behold the Lamb of God, behold him who takes away the sins of the world.  Blessed are those who are called to the supper of the Lamb.”  Words that become too familiar tend to lose their impact, so today’s Gospel offers an opportunity to reflect and savour their richness as if this were our first time to hear these words.

The application of the image of the lamb to Jesus grew out of a rich vein of Jewish thought.  When Moses prepared the Hebrew people to escape from of slavery in Egypt, the angel sent to kill every firstborn male passed over their houses which were marked with the blood of a lamb.  Then they passed safely over the Red Sea.  After settling in the Promised Land, an annual remembrance of that liberation became the Passover feast, the highlight of the Jewish year.  When family groups gathered for the sacred meal, the principal item on the table was a lamb that had been sacrificed.  In many places they ate it standing, dressed for a journey.

In the chronology of John’s Gospel, the death of Jesus took place at the very time when the Passover lambs were sacrificed.  And the ritual instruction regarding the sacrificial lambs also applied to Jesus: “Not a bone of his shall be broken” (John 19:36).

From the earliest days of the Christian communities, the symbol of the lamb was retained, recognising that the death of Jesus replaced the sacrifice of animals.  Little more than twenty years after the death of Jesus, a passing reference in a letter of Paul suggests that his readers were already familiar with the idea that Jesus Christ had replaced the multiple sacrificial lambs: “Christ, our Passover, has been sacrificed” (1 Cor 5:7).

Animals were sacrificed for many important occasions.   Atonement for sin required the sacrifice of a goat or a lamb, and this too took on a new meaning for Christians.  “Remember, the ransom that was paid to free you … was not paid in anything corruptible, but in the precious blood of a lamb, without spot or stain, namely Christ” (1 Pet 1:18-19).

What we call redemption is the third of three acts in the great drama of the world.  The first act is about God, who created the universe and called it good, while humankind was said to be very good.  The second act is the story of sin which is the antithesis of God … with deceptions and divisions, bad will, hatred and murder.  The third act is the connection between the God of goodness and the world of sin.  “For God loved the world so much that he gave his only Son, so that everyone who believes in him may not be lost but may have eternal life” (John 3:16).

God’s mercy is greater than sin

John the Baptist identified Jesus as the Lamb of God who would take away the sin of the world.  Critics of Catholicism speak of Catholic guilt.  But when somebody does some wrong, guilt is the proper response.  In humble confession a penitent comes to admit this guilt.  But for many people the sense of guilt stays in the mind.  They find it very hard to accept divine forgiveness.   Many people who come to confession regularly continue to recall sins of the past instead of rejoicing in the mercy of God.  It is only in recent times that we have become aware of the harm done by sexual abuse.  A great many victims, although totally faultless, continue to blame themselves and cannot shake off feeling dirty.

A psychiatrist can help one to sift through the rubble of memories for the root cause of sin.  A counsellor can help one to come to terms with the situation.  But the only power that can take away sin is God’s loving mercy which is greater than sin.  In the Twelve Steps of rehabilitation from an addiction, an essential step is handing over one’s powerlessness to the higher power.  Saint Paul affirmed how God’s grace is greater than sin: “However much sin increased, grace was always greater” (Rom 5:20).

The Supper of the Lamb

Let us return now to the celebration of the Eucharist.  As the sacred host is raised before our eyes, the words of the Baptist are heard again to express our faith.  “Behold the Lamb of God, behold him who takes away the sins of the world.

Blessed are those called to the supper of the Lamb.”

We then express our unworthiness but also our trust in God’s word.  “Only say the word and my soul shall be healed.”

Lord Jesus Christ, you are the Lamb of God who takes away the sinfulness of the world.

Help us to recognise how your mercy is so much greater than our sins.

We pray especially for those who cannot shake off feeling dirty because others abused them.  You take away the sin of the world.  May your divine mercy touch their hearts and minds as they experience the deep cleansing of your compassion.

Although we will never be worthy to receive Holy Communion, we trust that you will say the word inviting us to the Supper of the Lamb.

Lamb of God who takes away the sins of the world, have mercy on us.