Sunday Reflection – How the Saints put flesh on Theology 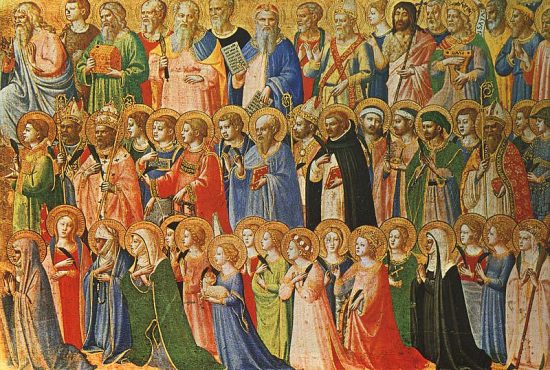 Normally, our weekly reflection is based on the Gospel of Sunday, but this week we will concentrate on November which commenced last Tuesday, the Feast of All Saints.

In the northern hemisphere, November is the darkest month.  The poet, Thomas Hood, captured the mood.

“No shade, no shine, no butterflies, no bees,

No fruits, no flowers, no leaves, no birds,

In pre-Christian Ireland, Summer began with the festival of Bealtine, which can mean a bright fire or the fire of Belanus, also known as Baal, the object of worship in the Old Testament.

Six months later, the November feast of Samhain marked the entry into the season of darkness and coldness.  It was the threshold between light and darkness, between the material world and spiritual, between life and death when the spirits of the departed were thought to be very near.  Some were playful while others were harmful, offering trick or treat.

It’s not clear when exactly the Church took over and gave a Christian meaning to the celebration.  What better way to give meaning to the season of death than to celebrate all the saints who passed from this fragile life to the eternal joy of heaven?  Hallowe’en means the evening before All Saints Day.

Sadly, as Christianity is waning, the pagan customs are re-emerging with witches, skeletons and dark webs set up by evil spirits.  It may be fun but we have lost the celebration of the Saints.

Saint John Paul II beatified and canonized more saints than all his predecessors.  He often referred to the living theology of the saints.  Christian living resides not in books but in the lives of holy people.  At a time when scandals in the Church were beginning to be publicised, the recognition of so many genuinely holy men and women was a statement that the Church isn’t totally bad.  It is a historical fact that the lowest periods of the Church produced the greatest saints.  Rather, the Spirit of Pentecost breathed afresh to renew the face of the earth, enkindling the fire of divine love in the hearts of new saints. The valley of dry bones was filled with life under the breath of God.   G.K. Chesterton, with his typical humour wrote: “There were five times when the Church went to the dogs but it was the dogs who died!”

Francis and Dominic went back to the lifestyle of the Gospel

Back in the twelfth and thirteenth centuries the popes had armies at their command.  Bishops had huge political power. Crusades were organized to oppose the Saracens or Moslems who had taken over the Holy Land.  Many holy and idealistic Christians joined those armies, but the evils of war quicky contaminated the ventures.  In the meantime, Saints Francis and Dominic inspired a new kind of religious life based on a very simple lifestyle inspired by the Beatitudes of the Gospel.   By the inspiration of the Holy Spirit, they struck the chord that the world needed to hear. Thousands followed their example because nothing can stop the attraction of an idea which has reached its time.

Reform in the Sixteenth Century

In the sixteenth century, the Protestant Reformation had shown up many forms of corruption in the Catholic Church, but the Holy Spirit inspired the Counter Reformation.  It was a period of wonderful reformers, saints with diverse charisms.  Let us look at some of these saints and the different reforms they represented.

We start with Saint Charles Borromeo who, more than anybody else, drew the long, meandering Council of Trent to its conclusion.  He drafted the documents of the Council as well as the Catechism which was used until recently.  Having completed his work in Rome, he was appointed Bishop of Milan.  One decision of Trent was that a bishop should reside in his diocese.  Milan, the largest diocese in the world, did not have a resident Bishop for eighty years!  Now they had a shepherd, not a prince, who visited every parish, arranged for a synod of reform, set up catechetical instruction, cared for the poor and visited the sick.

At the same time, Saint Ignatius of Loyola, a soldier whose military career was ended by a bad injury, found a new direction while reading about the life of Christ and the lives of the saints.  With a few friends he founded the Society of Jesus, a new form of Religious Congregation like an army at the service of the Pope through foreign missions, education and retreats based on discernment of spirits.   His friend, Francis Xavier, ventured as a missionary as far as Japan.

Meanwhile, Saint Philip Neri developed an apostolate with young businessmen in Rome.  His attractive personality drew people to his little oratory.  Biblical texts were set to music, thus the beginning of music known as an Oratorio.  He would have liked to travel on foreign mission but he was advised to stay where he was and became known as the Apostle of Rome.

Meanwhile, Saint Francis de Sales in Switzerland counteracted the dour face of Calvinism, through preaching and writing on the love of God, putting a smile back on religion.  He helped Saint Jane Francis de Chantal, a widow, to form the Sisters of the Visitation, a new form of religious congregation, living outside the cloister.

Other great reformers were Vincent DePaul, Louise De Marillac, Teresa of Avila and John of the Cross.  And there were several other reformers.  What began as a very low period in the Church, under the inspiration of the Spirit of Pentecost, flourished with new vitality.

Where do we stand today?

It is obvious that we are in a very low period today, with closure of churches, ageing clergy, lack of seminarians, and smeared with scandals.  The tide has to go out fully before it begins to come in again.  How further out must it go?  When will people begin to sense that there is a God-shaped emptiness in the human heart?  Virtually every night the News reports a murder.  Marriages break up.  The threat of destruction of this planet is caused by human lifestyle.  The gap between rich and poor is constantly widening.  Not only the Church, but all society needs serious reformation.  Could a return to religion be the answer?  It was reported by some journalists that faced with the dreadful tragedy in Creeslough recently, it which was the local church which emerged as the centre of consolation.

Remember that the lowest periods in the Church produced the greatest Saints.  Dark November commenced with a celebration of the Saints of the past.  I firmly believe that the breath and fire of the Holy Spirit will inspire new saints who will renew the heart of the Church and the face of the Earth.  Meanwhile, we are invited to a synod which means a walk with Jesus Christ and the Holy Spirit to discern the future of the Church.

A Prayer to be repeated every day

Come Holy Spirit, renew the heart of the Church, renew the face of the Earth.

Enkindle within us the fire of your love.