Sunday Reflection – The proper use of money 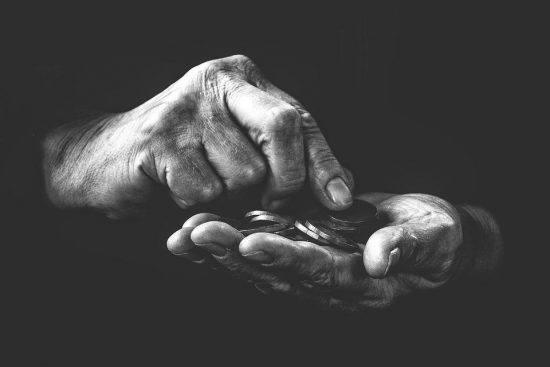 In the past I often heard people complaining that too many Sunday sermons were about money.  I don’t hear it nowadays, probably because the parish newsletter and parish council publicize the financial needs.  This Sunday however the Gospel (Luke 16:1-13) suggests that the preacher should talk about money, dealing with its wrong use and right use.

It begins with the parable of the unjust steward.  He was suspected of fiddling with the master’s finances and it looked certain that he would lose his job.  So, he used his cuteness, writing off some huge debts so as to ensure that he would have friends to look after him when he would be sacked.  The master praised him for his astuteness.  In telling the parable Jesus certainly was not justifying dishonest dealings but the point he made was the challenge to the children of light to be as enthusiastic and energetic about their work as the moneymaker was about his.

In the follow up to the parable Jesus makes three comments about money: how to use it; it is tainted; it can make one a slave.  Money is a great source of service with potential for good, but it becomes a tyrannical master if it takes over life.

Jesus never showed any desire to be a possessor.  Having left behind the home security of Nazareth, he often had nowhere to lay his head.  He depended on the generosity of others who would minister the Father’s providence to him.  He did not condemn rich people as such.  There were plenty of property people such as Nicodemus and Joseph of Arimathaea among his disciples.  He accepted invitations from people who were wealthy enough to host a banquet.  He defended the extravagant anointing from Mary of Bethany when Judas grumbled about it.

He encouraged people to use money with a conscience.  One per cent of the world’s population own fifty per cent of the world’s wealth.  Last night, on the News, a reporter in Somalia said that every forty-eight seconds, a child dies from starvation.  “Alas for you who are rich: you are having your consolation now.  Alas for you have plenty now: you shall go hungry” (Luke 6: 24-25). The unjust steward used money to win friends who would look after him after him following his dismissal.  Jesus spoke about a different sort of friend, one who would welcome you, not into an earthly home, but into the tents of eternity.  Forget all your stories about St. Peter at the gate of heaven.  It’s the poor who operate the ticket turnstiles.  They are the ambassadors of God’s welcome, the friends who will welcome you in Christ’s name.  “Whatsoever you do to the least of my brethren, that you do unto me” (Matt 25:40).

While wealth is a gift with great potential, Jesus twice warned that it is tainted.  It is toxic, a carrier of temptation.  Saint Paul wrote, “The love of money is the root of all evils and there are some who, pursuing it have wandered away from the faith and so given their souls any number of fatal wounds” (1Tim 6:10). Even the treasurer of the apostles, Judas, fell prey to the temptation to help himself to the common fund.  Eventually he betrayed the Lord for thirty silver pieces, a paltry sum, the going price for an injured slave.

We have very expensive tribunals attempting, with very little success, to uncover tax evasion and graft which is the misappropriation of public money.  Many small business concerns go to the wall because creditors do not pay up. As far as many people are concerned, Insurance Companies are there to be ripped off.

In today’s First Reading, Amos condemns the exploitation of the poor.  We must ask ourselves if we have a conscience about trading in the products of exploitation.  Do we regard a contribution to a charitable organization or aid to impoverished lands as a matter of justice or simply a feel-good gesture of charity?

The third word that Jesus associated with money is slave.  One becomes a slave to money when it preoccupies the mind, sets values, directs behaviour, and deadens one’s conscience.  The slave is one who has lost freedom.  Then one puts work totally before family, there is pressure to have the latest model, and Sunday ceases to be a sacred day of rest.  Profit, productivity and pay displace family, friends and fun.

Financial success is a wonderful gift offering the opportunity to do great good.  But it is tainted with temptation and burdened with the responsibility of sharing with those who are impoverished.  It is not just a matter of charity but one of justice.  The rights of ownership are carefully protected by law but the responsibility of sharing God’s gift with others is blandly ignored.

“No servant can be the slave of two masters: he will either hate the first and love the second, or treat the first with respect and the second with scorn.  You cannot be the slave both of God and money.”

The gap between rich and poor continues to grow wider.  The early Christian community understood that people who share in the breaking of bread in the Eucharist were obliged to share their possessions with those in need.  Every gift of the Creator comes with the responsibility of using it and sharing with the poor.

O God, the Creator of all and the giver of every good gift,

Open our hands to receive your gifts with gratitude,

Open our eyes to see the needs of others,

And open our hearts to be generous in giving.