The Real Presence – The Solemnity of Corpus Christi 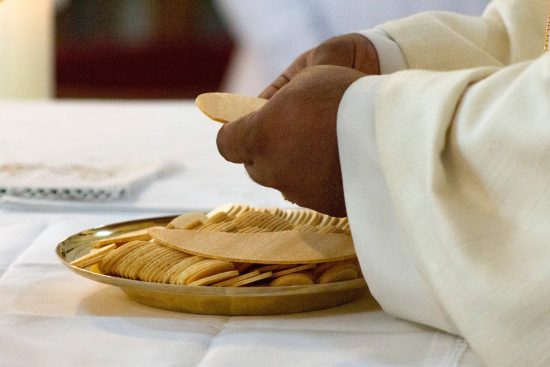 Image by Norbert Staudt from Pixabay

The Real Presence is the Real Thing

The Feast of the Body and Blood of Christ is a celebration of the presence of Jesus Christ in the Blessed Eucharist.  It is an astounding belief.  We would not dare to hold this belief except that it is based on the very words of Jesus himself.  “I am the living bread which has come down from heaven.  Anyone who eats this bread will live forever; and the bread that I shall give is my flesh, for the life of the world.”

The late Brennan Manning, author of many inspiring books, told this story about his mother, a retired nurse, living in Brooklyn.  Her source of energy for each day was the Eucharist.  Because she began a voluntary stint at a drug detoxification each morning at 7:30 am, the only Mass she could attend was at 5:30 am.  Across the road lived a very successful lawyer, mid-thirties, married with two children.  Driving home from a late party at 5:00 am one January morning, the roads glassy with ice, he said to his wife, “I bet that old bag won’t be out this morning.”  But there she was on her knees negotiating the slippery slope up to the church.

He went home, tried to sleep but could not.  Around 9:00 he rose, went to the local presbytery and asked to see a priest.  “Padre, I am not one of yours.  I have no religion.  But could you tell me what do you have in there that can make an old woman crawl on hands and knees on an icy morning?”  Thus began his conversion, along with his wife and family.

What does the Real Presence mean?

“What have you got in there?”  I suppose we could answer, “What we have is the real thing”.  We speak of the Real Presence in the Blessed Eucharist.  What do me mean by real?  In popular usage when we say something is real, we mean that it actually exists as opposed to being imaginary or fictitious.  When we speak of the Real Presence of the Lord in the Blessed Sacrament, do we imply that there is something less real about God’s presence in Sacred Scripture, in a community of people gathered to pray in God’s name or in the wonders of creation?  The word real as used in eucharistic theology is a transliteration of the Latin word realis which means pertaining to a material thing.  Sacraments are perceptible signs using material things such as water, oils, bread and wine, as well as words and actions which make present the grace they signify.  If I may invent a word, perhaps we might speak of a “thinged” presence of God’s action and grace.   The Real Presence is the real thing!

A new form of bodily presence

Go back to the institution of the Eucharist at the last supper.  The Lord was explaining to the apostles that no longer would he be with them in his human body but he would remain in a new embodiment.  Taking some bread, he blessed it, broke it and gave it to them saying, “This is my body which is for you; do this as a memorial of me”.  In the same way, taking the cup of wine he said, “This cup is the new covenant in my blood.  Whenever you drink it, do this as a memorial of me.”  The bread and wine which are consecrated by the Holy Spirit become for us the Body and Blood of our Lord Jesus Christ.  The disciples were instructed to “Do this in memory of me.”    At the consecration, the Holy Spirit brings us Jesus as the bread of life.  Then, at receiving Holy Communion Jesus brings us the power of the Holy Spirit.

Recently I read about a survey taken in England where participants were given a list of names and asked to identify those who were real or who were virtual people.  Believe it or not, but more than half of the answers identified Winston Churchill as virtual.  Maybe it was due to Churchill’s presence in several recent films and documentaries.   There is a growing coterie of people living more in the virtual world that the real world.

During the height of the Covid-19 pandemic, churches were closed and people got accustomed to following Mass online.  I’ve met many people who searched around and settled on a site they found very enriching.  Churches have been open for several months but the number who have returned is seriously diminished.  My own experience is that less than one-third have returned here.  I know that many of the older generation who formed the backbone of Mass attenders have genuine reasons for not coming outdoors but there are others who prefer the online or virtual Mass.  Maybe the music is better than the local liturgy, or the preaching is better.  But isn’t there something missing?  No Holy Communion!  The Real Presence of the Lord, coming to us as the bread of life, the greatest source of energy for the practice of Christian living.  In the light of Sacred Scripture and the food of the bread of life, we are sent out from the celebration to love and serve the Lord.  As Jesus told the apostles in today’s Gospel, “Give them something yourselves to eat.”

We need an adult understanding of our faith

Pope Francis is encouraging us to engage in a Synod, which literally means walking together with other people and with God.  Who knows what will come from this process? One wish I have is for people to be drawn into an adult understanding of our religion. Do people today understand what Holy Communion is?  Do they welcome the Lord?  Do they spend time in thanksgiving? What is meant by the invitation to the Supper of the Lamb?  Why do we say “Lord, I am not worthy that you should enter under my roof but only say the word and my soul shall be healed”?

After Mass I love to ponder on the words of Saint Francis.  “O sublime humility, O humble sublimity, that the Lord of the Universe, the Son of God so humbles himself that for our salvation, he hides himself under the little form of bread!”  I believe Lord, help my unbelief.