So sad to hear the great Leonard Nimoy has passed! May he rest in peace!

His connection to the Franciscan tradition is interesting if a little oblique! 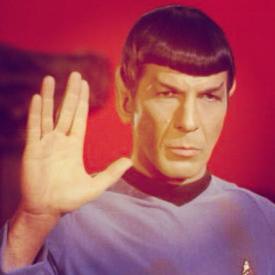 The famous split fingered hand position of the “Vulcan Salute” came from his Jewish heritage. This is the position the Rabbis hold their hands in to impart the Mosaic Blessing. This was the form of blessing given by God to Moses to give to Aaron as High Priest by which he was to bless the people. The gesture, when used with both hands, was seen to symbolise the Hebrew characters that spell the Holy Name of God as revealed at Sinai. This blessing is still used at the Ordination of every Catholic Priest and was adopted by St. Francis when he blessed the brothers and so is used by the friars to this day! One of the few pieces of writing we have in the hand of St. Francis himself is in the form of this blessing which, shortly after he received the stigmata, he gave to to Br. Leo, one of his earliest followers.
The blessing is as follows:
May The Lord bless you and keep you,
May The Lord turn His face to you and be gracious to you,
May The Lord look upon you with kindness and give you His peace!
May The Lord bless you +