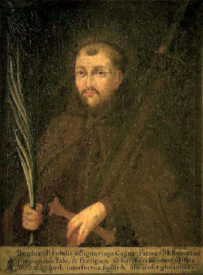 Another day another sainted Capuchin!

Today we celebrate our first martyr: Brother Fidelis; a name which means “faithful one”, given to him at his reception into the order by his superior who in so doing quoted the words of the book of revelation, “Be faithful into death and I will give you the crown of life! Prescient words for what would follow.

Giving up a successful career as a lawyer he gave himself fully to the Capuchin way of contemplation and evangelisation accepting a dangerous mission of reconciling with the Church the Calvinists of Switzerland. A place that was not just riven with theological dispute but political unrest masquerading as reform. Fidelis soon became known as such a wonderful preacher with a deep love for the poor that he was invited on numerous occasions to come to the Calvinist churches to preach! Something extraordinary considering the deep vitriol often thrown by both churches at each other at the time.

Finally, this became too much for one extreme group and they began to plot his demise. This was reveled to Fidelis in a vision, after which he began to sign his name as “Fidelis soon to be the food of worms”! He was noted by his brothers as being even more cheerful than ever as he went to preach one last time in the Calvinist church. Knowing he would not survive he insisted on receiving the Last Rites before he attended. On arriving at the pulpit he found a message telling him that this was to be his last sermon, nonetheless he preached as usual to the unsuspecting crowds. At the end of the service a mob bursed into the church and threatened to kill him if he did not renounce the Catholic Faith. This he refused to do, and seeing they were about to kill him, asked, in a final ecumenical gesture that won the hearts of all present, if they would murder him outside instead as he did not want them to spill blood in sacred ground and add the sin of sacrilege to their crimes. Thus his last act of witness included an affirmation of the holiness of his Calvinist bothers and sisters as fellow followers of Christ. Leading the mob outside he knelt down and prayed, publicly pardoned his killers and was slaughtered by clubbing and finally a sword thrust through the heart.

The leader of the mob later converted to Catholicism on account of the way in which Fidelis met his death. He died on the 24th of April 1622 and was 44 years of age. Our first martyr and our youngest saint.

May he pray for all those persecuted for following Christ to this day.
Picture above of St. Fidelis and below of the Relic of his skull. 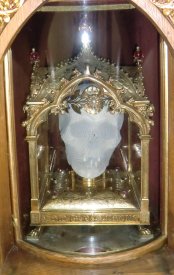