We express our deepest sympathy to Charles’s family and friends as well as to the Friars of the Delegation of Great Britain. Brother Charles had a close association with Ireland over many, many years. He will be solely missed at local and international levels. May he rest now in peace. Amen.

Taken from the website of the General Curia in Rome: 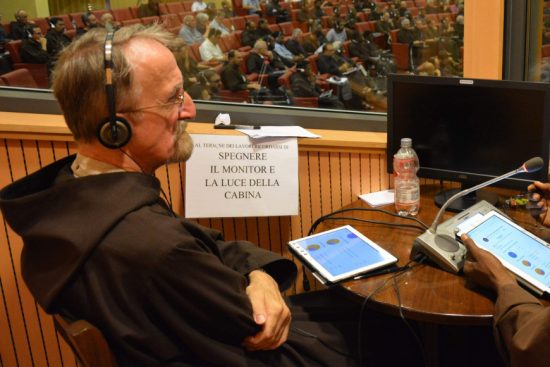 It is with deep sorrow that we announce the news of the death of Br. Charles Sérignat, who passed on October 6, 2021.

His profound knowledge of languages had made him the interpreter par excellence of the Order. As an interpreter, he played an indispensable part at international Capuchin meetings, assuring the most accurate translations in real time – a role that he assumed faithfully until the end. He was also a dear brother who dedicated his life for the good of the Order and the Church. He faithfully carried out his duties with the general secretariat at the General Curia and subsequently as personal secretary to Minister General John Corriveau. In addition, he served as provincial definitor and provincial vicar in his own province.

We should not overlook the suffering endured by Br. Charles during his last years, which he assumed with a spirit of profound faith, great dignity, and serenity. He recognized and embraced his pain as a means of purification.

The General Council and all the confreres of the Curia offer our prayers of suffrage for the repose of his soul, and it is our hope that his testimony serves as an incentive for the journey of faith and spiritual growth of all those who have enjoyed his fraternal and priestly service.