Feast of Our Lady of the Angels: The Blessing of the Portiuncula

Today, (August 2nd), we in the Franciscan Family keep the Feast of Our Lady of the Angels!

This is the patronal title of the Blessed Virgin under which St. Francis placed the Order. St. Francis had great devotion to Our Lady under this title due to his repairing of the little chapel of the “Portiuncula” (little portion) in the woods outside Assisi and becoming devoted to it as a place of prayer and meditation in which the earliest brothers gathered and St. Clare was first received into her vows, where St. Francis had a number of visions on Our Lady and the Angels and received the famous privilege of the “Pardon of Assisi” from the Pope, (a plenary indulgence that anyone may receive under the usual conditions in any church throughout the world in honour of Our Lady of the Angels.)Finally, it was at the Portiuncula also that Francis greeted Sister Death and passed to the Lord in the year 1226. 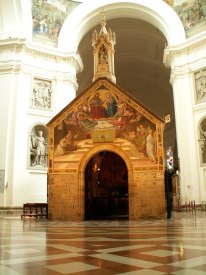 Some prayers in honour of Our Lady by St. Francis follow so you can pray with us today.

Hail, Lady and Queen,
holy Mary, Mother of God,
Virgin who became the Church,
chosen by the Father in heaven,
consecrated by his beloved Son
and his Spirit, the Comforter:
in you was and remains,
the whole fullness of grace
and everything that is good.
Hail, his palace,
hail, his tabernacle,
hail, his dwelling,
hail, his robe,
hail, his handmaid,
hail, his mother!

O holy Mother,
sweet and fair to see,
for us beseech the King,
your dearest Son,
our Lord Jesus Christ,
to death for us delivered:
that in his pitying clemency,
and by virtue of his most holy incarnation
and bitter death,
he may pardon our sins.

Holy Virgin Mary,
among all the women of the world,
there is none like you.
You are the daughter and handmaid of the most high King,
Father of heaven.
You are the mother of our most holy Lord Jesus Christ.
You are the bride of the Holy Spirit.
Pray for us, with St. Michael the archangel,
and all the powers of heaven
and all the saints,
to your most holy and beloved Son,
our Lord and Master, Amen. 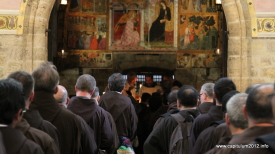