It’s 10am on a Saturday morning and it’s already nearly 15 degrees. Dublin city centre is alive with tourists, commuters and shoppers going about their business. In a small corner of Smithfield stands St Paul’s Church, Arron Quay. Closed for many years it is now a centre for evangelisation in the Dublin Archdiocese. It serves as both a city centre hub and a place of sanctuary. On this particular morning the Church is hosting one of a number of World Youth Day preparation events organised by the Archdiocesan World Youth Day Oversight Team. By 10.15am the Church is buzzing with the sound of nearly 200 young adults who have come together to prepare for their pilgrimage to Krakow in July. On the agenda today are the themes of reconciliation and adoration and I had the great privilege of leading these sessions. 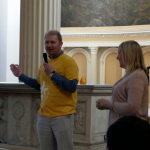 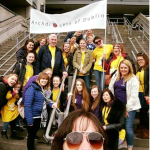 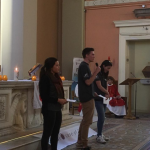 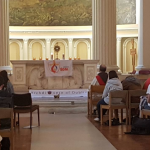 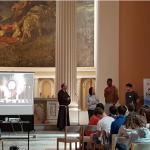 One participant commented that ‘it was a great day; it really felt like we were at World Youth Day’ and another was enthused by the ‘electric atmosphere’. At the beginning of the session on ‘Reconciliation and Mercy’ I told the crowd that ‘I’ve just posted a picture of us all to Facebook with the comment “some say the Church in Ireland is dying: have a look at this” and the crowd rightly gave themselves cheer! I was extraordinary to stand there and to be part of this.

With just over 70 days to go to WYD2016, these young men and women, some preparing for Leaving Cert and college exams, took valuable time out of their hectic and pressurised schedules came to St Paul’s to meet each other, pray together, listen together and prepare together. This was important enough for them to find the time and space needed to be there. And the atmosphere was electric from the start. Jonathan and Meg, two World Youth Day veterans (!), shared their experiences and stories, the music was sublime and provided by the newly formed World Youth Day Choir under the direction of Gerard Gallagher and Ciaran Coll. The day ended for the pilgrims with Mass followed by a time of Eucharistic Exposition, Adoration and Benedict. You couldn’t lead a pin drop as World Youth Day Leader, Frances O’Brien and I lead the prayers and reflections.

So to those who say that the Church in Ireland is dying…I say, come and see the new shoots that are rising from the dust. In fact, don’t just come and see; come and be part of it.