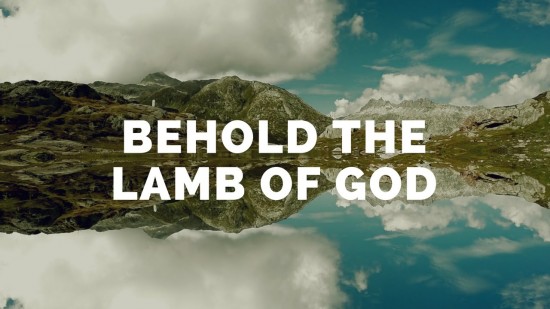 The Supper of the Lamb

“Look, there is the lamb of God that takes away the sin of the world”.   With these words John the Baptist identified Jesus as the one who would come after him.

Up to that time, when people wanted to thank God, or ask for something, especially the forgiveness of guilt, they sacrificed an animal, most often a lamb.  The greatest feast of the Jewish year is the Passover when they celebrate their delivery from slavery in Egypt and became a free nation with a land of their own. A key moment in their escape was when the destroying angel passed over the houses that were marked by the blood of the lamb.  Some writers say that in the time of Jesus, as many as 20,000 lambs were sacrificed in the temple.   These lambs were slain according to exact ritual and were then given back to family groups for their Passover Supper.

According to John’s Gospel, the death of Jesus took place at the time the lambs were being slain on the eve of the Passover.  In the rite of sacrifice, not one bone of the lamb would be broken.  John’s Gospel notes that this applied to Jesus too.

The early Christians understood that His sacrificial death, once and for all time, replaced all animal sacrifices.   St. Paul wrote, “Christ, our Passover, has been sacrificed” (1 Cor 5:7).  And the First Letter of Peter reads: “Remember, the ransom that was paid to set you free was not paid in anything corruptible, neither in silver or gold, but in the precious blood of a lamb, without spot or stain, namely Christ.”  (I Pet:1:18-19).

At Mass, when we celebrate our redemption through the sacrificial death and resurrection of Jesus, we acclaim him as the Lamb of God who takes away the sin of the world.   The grace of handing over all guilt to Jesus is a gift beyond anything we might deserve.   We would never be worthy of receiving the Lord Jesus as the Bread of Life but we come to the altar because Jesus invites us.  The Book of Revelation refers to heaven as the supper of the lamb.   We can regard the reception of the Lord in the Eucharist as a little foretaste of heaven.  That is why we say …

Blessed are those who are called to the Supper of the Lamb.