Religious Life in the 21st Century: A Reflection for Vocation Sunday

Capuchin Bryan Shortall takes some time this Vocation Sunday to reflect on the relevance of religious life. You can read more form Fr Bryan on his blog – https://bryanshortall.blogspot.com

The Driving Force – Religious Life in the twenty-first century

I sometimes look back to that September 1987 when I joined the Capuchins. Like most young people I loved music then and to this day, I associate some songs with the time I joined the order.  “Where the Streets have No Name,” by U2 would be one for example. Other artists charting that year would have been MAARS, George Michael and Aretha Franklin, Whitney Houston, Mel and Kim, and even actor Bruce Willis had a hit.  I’ve just done a Google search and I note that in the UK, Rick Astley was No.1 in the U.K. charts with “Never gonna give you up” in the week I joined the Order. Around the same time in the U.S. Michael Jackson had released his single “I just can’t stop loving you.”

Now, almost 50, it is almost impossible to get into the head of that 18-year-old Bryan Shortall. I heard the ads on the radio, “Dear 30-year-old me…” And I wonder what I’d say to that lad if I could go back and talk to him.  But he wasn’t for talking to. He was full of it, and full of the habit, and full of the sandals, and the friary, and the sense of community even though he didn’t really know what it meant.

He was sacred and emotional the day he joined. He missed his family, and his friends, and his girlfriends, and his breakdancing, and his dee-jaying. He didn’t miss school though, that was one good thing. He hadn’t a clue. He was going from shar 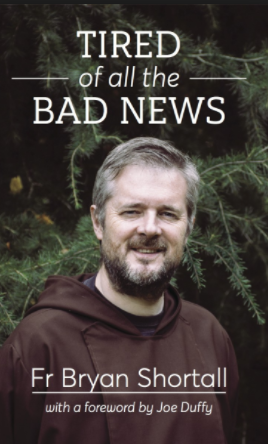 ing a room with his two brothers in suburban Dublin, with posters of the Beastie Boys on the wall, to sharing a religious house in the country with other men and pictures of the Pope and the General Minister of the Order.  The question he and the others who joined got asked a lot was “Have you settled in?” He used to hate being asked that question. What does ‘settled in’ feel like? And what’s the time line for settling in? He brought a selection of his LP records and it didn’t feel the same playing them in the sitting room of the Friary. The older lads didn’t wear white socks and they liked Dylan, and Jim Croce, and Neil Young, One of them couldn’t even say L.L. Cool J’s name properly.  Things were never going to be the same. Not bad though, just different.

Over the years, I went back to the books but it wasn’t like school. This time I had a choice in what I learned and I enjoyed this. I began to grow up and learn what it is to be in religious life and I began to learn about the vows I had taken temporarily and would one day take for life. I learned more and more about St. Francis of Assisi and his influence on the world of his time and how his powerful message is still relevant in our world today. So relevant that our present Pope has taken his name.

Most importantly, I found myself growing in my relationship with Jesus Christ. Not in an over-the-top holy-joe way. There were never apparitions or claps of thunder and even though I kind of knew that this vocation was from Jesus Christ at the beginning, it is only as I go on I know it is. I know it deep down – it’s the driving force. Like a couple who fall in love, it’s a vocation. They work on their relationship; they have their highs, and lows, and their joys and sorrows. For a religious, it’s a similar dynamic, but perhaps our way of life is little understood in today’s world I would argue.

How does our society make sense of the vocation to religious life today? What language is there to explain why I still want to be a religious? I believe it is in me, and I can’t walk away. At the beginning and over the years, there weren’t any guns put to my head and I wasn’t forced to join. And I’m not being forced to stay. As the friars used to say to us, the friary is not a prison. The only reason why I’m still here is that I can’t go. I’m trying to find English language to explain it and I struggle, It’s like I had no choice and I still have no choice.

And how do we as religious put language on why we still want to be in this religious life? Or quite frankly how do we make the religious life attractive to people who may be discerning a way of life? I look around at meetings with other religious, and especially where there are younger religious and I don’t need to be convinced they believe, I can see it in their eyes, and the eyes are the mirror of the soul. This advice was attributed to St. Francis of Assisi; “Preach the Gospel, and if necessary, use words.” we religious will help people to know who we are and witness to Jesus Christ by our example primarily.

Did you ever wonder what it might be like to be a religious brother, a sister, or a priest in a world, and at a time when there are many other choices for people?